Picture this: two women yelling outside a club, dressing each other down verbally while readying themselves for a physical confrontation. It’s a familiar scene with its own conventions — what we call a “catfight.” It also makes for great material for Key & Peele, a show that often cracks open the cultural codes we take for granted. The sketch “Fight Prep” inspects two conventions that define the catfight: the notion that women must compete against one another for power in a patriarchal world, and the resultant mockery of competing women for being “catty.”

“Fight Prep” follows two women, Jacqueline and Denise, as they participate in the drawn-out preliminaries to a much-anticipated fight. The sketch begins with Jordan Peele’s Jacqueline and Keegan-Michael Key’s Denise bickering while leaving a club — though the catalyst of their disagreement is unknown. Out of the blue, Denise gets in Jacqueline’s face and tells her that “it’s a free country, biiiiitch,” elongating the last word.

Eyes wide with disbelief and mouth agape in anger, Jacqueline steps back from Denise, her initial annoyance turning into astonishment. Denise’s use of the term “bitch” particularly sparks Jacqueline’s anger because it is a gendered insult used specifically to disparage women. Thus, when Denise, a fellow woman, weaponizes that language, it fractures any potential solidarity between the two women and lights the fuse for a stereotypical catfight.

In response to Denise’s insult, Jaqueline readies herself for a physical altercation by taking off her earrings. Denise follows suit, and the two women then proceed to remove all of their accessories. As we watch Denise pluck off her bright blue acrylic nails and Jaqueline tear off her layered gold necklace, we laugh at the women’s ostentatious preparations, and the petty comments that accompany them, like “Step to me then” and “I ain’t even playin’.”

The scene parodies the common trope of the fight-ready woman asking an onlooker to “hold my earrings” by having Jacqueline and Denise dramatically remove not only their earrings but also all of their other accessories. The women’s exhaustive unmaking of their physical appearances — from their jewelry and nails to, later, their contact lenses and underwear — also reveals the labor of self-presentation that comes with being female, and the effort required from women to meet societal standards of beauty. The contrast between the plain shirts of Jacqueline and Denise’s bystanding boyfriends and the women’s elaborate outfits  further highlight the disparate aesthetic expectations for men and women.

Jacqueline and Denise’s extensive unmaking is also a clear attempt to stall the impending fight, rather than prepare for it. Their stalling reveals how women feel obligated, rather than genuinely motivated, to compete with one another for the limited power available to them within a patriarchal society. Tired of performing the labor of looking “pretty” and partaking in intragender competition, Jaqueline and Denise’s lengthy removal of their accessories can be interpreted as a form of rebellion — a rejection of beauty standards as well as a way of proving to onlookers (including their boyfriends) that they will not passively tolerate disrespect.

As Jacqueline and Denise prepare to fight, a stereotypically male activity, they remove the visual indicators of their femininity, like their jewelry. But while male aggression and competition are often perceived as dignified and justifiable, Jacqueline and Denise’s argument is framed as a frivolous and ridiculous cat fight.

Jacqueline and Denise’s stalling reveals how women feel obligated, rather than genuinely motivated, to compete with one another for the limited power available to them within a patriarchal society.

The two women exemplify this ridiculousness by removing accessories that would in no way impede their ability to fight, like Denise’s contacts, which she peels off her eyes dramatically. These exaggerations portray the women as needlessly histrionic and diminish the validity of their argument.

To further undermine their credibility, Jaqueline and Denise’s boyfriends appear visibly ashamed of their girlfriends’ actions, looking away in embarrassment. However, Jacqueline and Denise remain stubbornly oblivious to how they are being perceived, continuing to animatedly yank off their apparel and accessories.

In the midst of their stripping, Denise further aggravates Jacqueline by again calling her a bitch. This time, it’s a demand to stop dawdling and start a real fight. Rebuffing Denise’s demand and stalling once again, Jacqueline yanks off her push-up bra and glares at her opponent. Denise, quick to match Jacqueline, wiggles out of her Spanx and tosses them aside.

We are left shocked as the women, who are expected to be modest and even secretive about their undergarments, act so publicly brash. It is surprising to see the two women flaunt their decision to wear figure-enhancing shapewear. It’s not so much that they are undressing before our eyes — Denise looks similar with her Spanx and without her Spanx — but that they are revealing the extreme measures women take to be “beautiful”.

Ostensibly, by removing these constricting garments, the women free themselves to assert their dominance — but, in doing so, they also heighten the absurdity of their conflict. Onlookers laugh and their boyfriends look away in embarrassment as the women wave their personal garments in each other’s faces. These women, who want to garner respect and power through their argument, instead receive derision and pity. Thus, while Jacqueline and Denise’s unmaking is an attempt to assert themselves, to their audience, it’s a overacted grab for attention.

As the argument reaches its climax, Denise goads Jacqueline once again, saying, “Let’s do something, bitch.” As a thunderous drum begins to play in the background, Jacqueline slowly unzips her body to reveal two young girls stacked on top of each other. Onlookers collectively gasp, and Denise’s expression shifts from contempt to pure surprise.

This reveal thrusts the sketch firmly into the realm of the absurd. On a symbolic level, the revelation shows that Jacqueline’s accessories, aggression, and outer womanly body are all an artifice, constructed in response to the demands of society. When those are cast aside, youthful, girlish innocence remains.

When two young girls are uncovered as the true operators behind Denise’s façade, their innocent smiles seem to indicate that the conflict is over. But suddenly, they rush to Denise and slap her, running away screaming, “We told you not to mess with us, bitch!” Notably, the onlooking boyfriends, who have passively observed the conflict, are suddenly alert and shocked at the girls’ attack on Denise. While this twist inspires laughter, it also juxtaposes two girls working together with two women fighting, demonstrating how female competition is not inherent within women but learned over time.

While the final twist of “Fight Prep” inspires laughter, it also juxtaposes two girls working together with two women fighting, demonstrating how female competition is not inherent within women but learned over time.

“Fight Prep” ends with an astonished Denise earnestly asking bystanders, “Did y’all just see that bitch turn into two little girls?” Even though it was the girls slapped her, and Jacqueline is revealed never to have existed at all, Denise is still angry with “that bitch,” who she continues to perceive as her competitor and, therefore, a direct threat to her power.

Indeed, Jacqueline and Denise’s rivalry can be seen as a manifestation of their resentment towards patriarchal power barriers, rather than an attempt to outdo each other. Female rivalry and “cattiness,” then, are the byproducts of the societal barriers and pressures that women face, rather than an instinctual behavior. 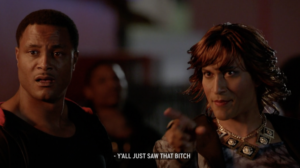 “Fight Prep” highlights the absurdity of female rivalry as well as its troubling roots in patriarchal society’s conditioning of women. As the little girls show through their teamwork, women are not inherently rivalrous. Instead, as girls mature, they are defined by their feminine self-presentation and forced to compete for limited power. The female rivalries that develop as a result of this forced competition are then weaponized to criticize women and brand their behavior as “catty.” Ultimately, “Fight Prep” reveals the roots and manifestations of female rivalry with comedic ingenuity.

Mallika Chennupaty is a junior at UC Berkeley studying Computer Science and Creative Writing. She enjoys writing short stories, consuming media made by women, and creating more opportunities for minorities in STEM fields. In the future, she hopes to explore the intersection between entertainment, technology, and writing.

The Key & Peele sketch “Nooice” builds off of an absurd premise: what would happen if

Unlocking Key & Peele is a digital project that emerged from "American Culture in the Age of Obama," a 44-person undergraduate lecture course taught by Scott Saul at UC Berkeley in Spring 2020.

This site is greatly indebted to Keegan-Michael Key, Jordan Peele, Paul Atencio and everyone else, whether above-the-line or below-the-line, who contributed to the genius of the show.

Unlocking Key & Peele was created through a workshop process similar to that of a sister site, on The Godfather—a process detailed here.

Latest from Comedy & Its Depths

“Negrotown,” one of the great sketches of Key & Peele’s four-year tenure,
“I pity the fool!”: the words are simple, yet packed with cultural
Every stand-up comic knows the feeling or lives in fear of it.
Jordan Peele’s Wendell Sanders is one of the great comic creations of
The 2014 Key & Peele sketch “Gay Wedding Advice” centers around the
Go to Top

The Key & Peele sketch “Nooice” builds off of an